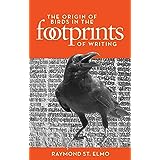 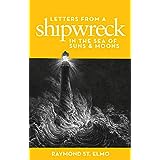 I took the kids to Brisbane last week. Only for a few days, at the last minute, but it was our first holiday of any kind in years so we tried to pack in all the stuff we don’t normally get to do – theatre, museums, that kind of thing. It was family time, nothing to do with work or writing. Honest.

And I did try, but something changes after you start writing, something to do with the way you look at things. I found myself mentally picking apart every show and every film, analysing them for plot and dialogue. I was studying the things around me and wondering whether they’d fit in my novels.

So for those interested in, I don’t know, things that caught my interest and might catch yours too, here’s my travelogue, through the lens of a writer of SF:

We saw Singin’ in the Rain

Now this was fun. What struck me was that the plot was so simple – it was obvious what would happen from the very first scene – and the dialogue, too, tended to state the obvious. But in a way, that was part of the charm – with no deep mystery to puzzle over we could just sit back and enjoy the show.

What could be more giggelacious than the nonsense song “Moses supposes his toeses are roses but Moses supposes erroneously”? And the first efforts at movie sound recording and lip-synching were hilariously imagined. Modern movies could learn from this – it doesn’t have to be deep, dark, or dangerous, just make it playful.

We went to the Queensland Museum (and it was free!)

So I was standing with my daughter at the fossilized Icthyosaur, and I’m kind of yawning because I’ve seen these things before, nothing new, but my daughter asks me why it has a bony ring in its eye and, dammit, she’s got me there, I don’t have a clue. Turns out it’s a sclerotic ring, which helped it see underwater and supported the eye against the pressures of the deep. So then I’m all excited because I’ve suddenly realised the Sanomi (one of my alien species) just have to have sclerotic rings.

Did you know this: modern-day whales and dolphins (mammals) resemble ichthyosaurs, which were reptiles, by the process of convergent evolution. This fact fills my little heart with joy because this is the same process I’m using to explain why some of my aliens are so very, well, human-ish. Why can’t we have convergent evolution on an interplanetary scale? 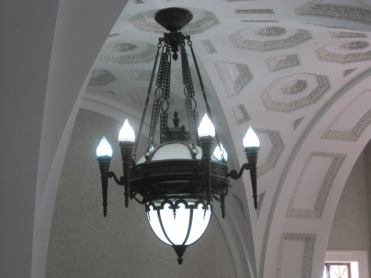 We went to the Museum of Brisbane (also free!)

Beautiful building, and check out the chandelier hanging above for steampunk or dungeon styling.

What caught my imagination, though, was the exhibition of modern art from Taiwan. For fantastic images that warp urban imagery into traditional mountainscapes, you’ve got to see  “A Bowl of Taipei” by Yang Yongliang. Check out this link:

We continued the Chinese cultural theme with the Shaolin Warriors.

This was where my kids, who are are not remotely interested in martial arts, caught me out. “Mum, are you sure you’re not just doing research for your book?” And yes, I was, because how else am I supposed to write the temple fight scene in The Hidden Link? I’ve got staff-wielding, saffron-robed monks in there, for goodness sake.

And this was an eye-opener, but not quite in the way I expected. What I saw was how incredibly hard the guys worked to not hurt each other. From the carefully choreographed sparring to the bendy staffs and fake swords, this was a reality far removed from the editing and special effects of the movies. And I don’t mean these fellows were even remotely wuss-like – their fitness, skill and agility was outstanding. It was just a sobering reminder that in real life, getting hit hurts.

And we went to the movies.

Not intentionally, really, but we didn’t fly back until evening and we’d seen as much of Brisbane as our legs could stand without a car (my daughter reckoned her feet had flat tyres). Have you noticed that Brisbane has this thing about weird and wonderful bridges? But after you’ve walked across three of them…

So, anyway, we saw this film which I presumed was about peculiar children. Living in a home. Run by Miss Peregrine. Which it was, but perhaps I shouldn’t have assumed that a film with “for children” in the title was necessarily “for children”. My youngest found it a little scary.

Personally, I loved it, even after recognising the tropes. I mean, we have a young man who struggles to fit in, who has no friends and fears he might be going mad. We have shapeshifting, eye-stealing bad guys out to become immortal. We have a group of weird kids who overcome their rivalries to work together to defeat said bad guys.

But any old tropes are fine with me, as long as they’re done well (in the words of Fun Boy Three: It Ain’t What You Do It’s The Way That You Do It) and this film tiptoes nicely along the line between the believable and the magical, leaning one way and the other but never losing its balance. There are moments of wonder and moments of fear, and none are overblown. There’s even a hint of a deeper question, a what if? choice between duty and love, but again, it’s not overblown. Nicely done.

So that was my holiday. It sounds better, somehow, written out, minus the confusion over tickets, the boring waity bits and the endless arguments over where to go to eat. I wonder if next time I could take out the airplanes and do it all by google…?