Followers of my blog (Hi, Mum!) may remember a previous post in which I was thinking about branding and how to present what it is my writing and my blog are all about. What is my core message? And what is my point of differentiation that sets my work apart from anyone else’s?

Well, apologies in advance for the personal and subjective nature of this post, but I’m going to explore this a little – it’s something I feel the need to go through to gain a better sense of direction. My idea is to deconstruct recent books and films in my current genre that have captured my imagination – not ones that I enjoyed as a child but those that appeal to the adult me – to see what it is that I liked. With a bit of luck, there may be something of interest to others in my thoughts, too.

I’m going to start with these, as examples of “my kind of sci fi”: 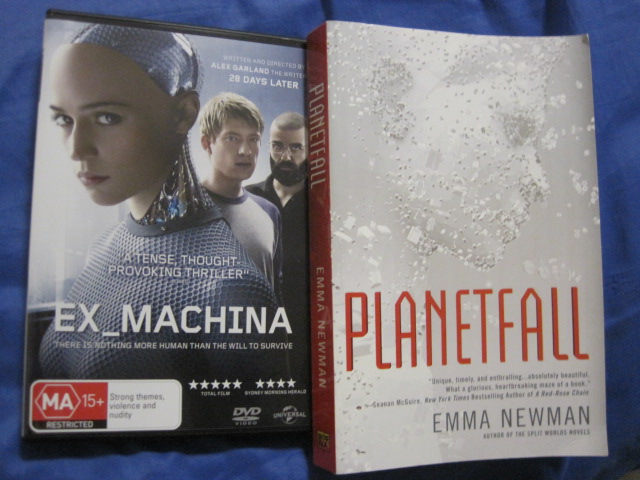 The book is Planetfall by Emma Newman and the film is Ex_Machina, written and directed by Alex Garland. If you haven’t yet read / viewed these and think you might want to, I suggest you don’t read on – I’m trying to avoid spoilers, but there’ll inevitably be plot hints.

So, neither of these are stories I’m going to forget in a hurry, I found them to be very powerful, and to do them justice might take more than one blog post. For now, I’m going to discuss one common feature: they’re both rather dark.

What do I mean by dark?

Well, they both feature a protagonist who is under heavy psychological pressure.

In Planetfall, Ren has been hiding a terrible secret for so long that it has affected her mental health. The book starts with a stranger arriving in her extra-terrestrial community, one who is likely to reveal that secret. It doesn’t help that the stranger is the grandson of her former lover, bringing back painful memories. Immediately the reader can see that Ren is in serious trouble, though we are not sure of the details – we don’t know what the secret is – but we need to read on to see how Ren fares.

The picture is drawn from snippets like this, in Chapter 1:

“Ren. What if he’s here to ruin everything we’ve done here?”

“Yes, we.” His voice hardens. “Should I shoot him and make sure he-”

“Oh for fuck’s sake, Mack, I’m an engineer! Not your conscience!”

His mouth drops open at my outburst and I regret the words. He just doesn’t want to be the       only load-bearing object in this messy structure.

In Ex_Machina, Caleb has been brought to billionaire Nathan’s claustrophobic retreat to test whether an artificial intelligence, constructed in the form of a young woman, has consciousness. From the mood of the film, it is immediately clear that Nathan has another agenda and Caleb may be in trouble. The viewer knows no more about this hidden agenda than Caleb does, but we can foresee the conflict between what Nathan is asking Caleb to do and what he feels to be right.

Nathan: This building isn’t a house. It’s a research facility. Buried in these walls is enough fibre optic cable to reach the moon and lasso it. And I want to talk to you about what I’m researching. I want to share it with you. In fact, I wanna share it with you so much, it’s eating me up inside. But there’s something I need you to do for me first.

Nathan: Take your time. Read it over.

Caleb: [continues reading] “The signee agrees to regular data audit with unlimited access, to confirm that no disclosure of information has taken place in public or private forums, using any means of communication, including but not limited to that which is disclosed orally or in written or electronic form.”

Caleb: I think I need a lawyer.

Nathan: Okay, it’s not standard. What can I tell you, Caleb? You don’t have to sign it. You know, we can spend the next few days just shooting pool, getting drunk together, bonding. And when you discover what you’ve missed out on, in about a year, you’re gonna regret it for the rest of your life.

The psychological pressure is so extreme that in Planetfall, it has pushed Ren to mental illness, while in Ex_Machina, after only a few days in Nathan’s house, Caleb starts to question his own humanity.

Nathan: Buddy, your head’s been *so* fucked with.

Caleb: I don’t think it’s me whose head is fucked.

Nathan: I don’t know, man. I woke this morning to a tape of you slicing your arm open and punching the mirror. You seem pretty fucked up to me.

Nathan: Yeah, well, I understand why you’d think that. But believe it or not, I’m actually the guy that’s on your side.

Another way in which these works have a dark edge is that the protagonist is faced with a moral dilemma.

In neither of these stories is there a clear way forward or an easy way out – whichever action they choose will have serious consequences for somebody. Behind both of them is a character of questionable morals, who has gradually forced them into an untenable situation. We feel for Ren and Caleb as they become ensnared in webs of lies and deceptions, hoping that they can find a way to extract themselves that does not harm others. Instead, the tension rises as the situation edges towards irretrievable disaster.

Snippets of dialogue reveal their inner tension. In Ex_Machina, Caleb is thrown off-kilter by the AI, Ava, asking him whether he considers himself a good person. In the end, he says that he is, but we can see the beginnings of doubt in his eyes.

In Planetfall, we have this:

I want to be the kind of person who would stand up now and declare that there is a better way, or that I’ll stand by my principles in this as all things and not do it. But what is the alternative? And I’m just as afraid of what will happen if the transition from lies to truth isn’t handled carefully. I should have spoken up over twenty years ago.

But if I had, I would be dead.

“You’d better show me how you do it, then,” I say, without bothering to hide the defeat in my voice. He isn’t the victor. Fear is. And cowardice.

Of course, I was hoping for happy endings. Unfortunately for me, with stories of this complexity and depth of moral ambiguity, “happily ever after” is not going to happen. What these stories did do, though, was present a twist towards the end, giving me that thrill of the unexpected. And with both stories, there is a strong sense of resolution and closure.

Personally, I don’t think I would have the stomach to write something quite as dark as these – I tend to adopt clearer-cut divides between good and bad, giving my protagonist a path that is more clearly “right”. I just like something a little easier on the emotions. But at least now I’m starting to get a feel for what makes stories like these so powerful.

It’s all about placing one’s protagonist in impossible situations, facing them with terrible moral dilemmas, and ultimately watching them make their choice and take the consequences.

There’s also power in the way the story is constructed, the timing of the reveals and the maintenance of tension and suspense – but I will save detailed discussion of these aspects for another post.

If you remember the title of this post, you may be wondering where “the light” comes in.

To me, it’s all about balance. What I’m really aspiring to is this: to create a story with something of this dark, psychological edge, and to have my character come through that to a place beyond. What I’m looking for is not the shallow happy ending of character who has not been stretched, but the deep happy ending of a character who’s been through hell and made it back.

Maybe this is something in my own psyche, that I need to see a way of climbing from dark places and finding hope and redemption. Discussion of my minor personal demons, though, I will save for another post.

For now, I have food for thought – how to get the balance right? In how deep and dark a place can I place my characters, while still allowing them to find the light and escape?

One thought on “Exploring Story Mood: The Dark and the Light”